As Young Nannies Leave Workforce to Attend School, Cameroonian Mothers Are Taking Their Babies to Work 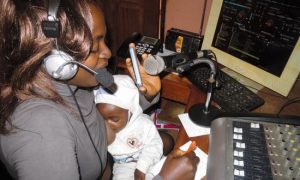 BAMENDA, CAMEROON – It’s a Friday morning and Brenda Kiven has much to do: care for her 17-month-old baby, wash his clothes, clean their apartment, and prepare food.A journalist and chief of news at Radio Hot Cocoa in Bamenda, the capital of Cameroon’s Northwest region, she also must get to work in time for the news organization’s weekly editorial meeting at 9 a.m.
Kiven does laundry, cleans the apartment and rushes to bathe before her son, David Achu, wakes up. By the time she steps out of her bath, David is awake. She bathes and nurses him.
It is already 8:30 a.m. Kiven has not completed all of her morning chores, but she cannot afford to be late for the meeting. She adjusts her schedule and dashes to work with her baby.When she arrives in the meeting room, her colleagues inform her the meeting has been canceled. It’s a busy news day, and reporters have been dispatched to cover breaking news events.
Kiven settles in the conference room with her baby and goes over scripts for a show that starts at 10 a.m. All the while, she also attends to David, feeding him and trying to keep his hands off of her papers.
Most of her workdays begin this way, she says.
“I come with my baby to work and go to press conferences with him,” she says. “I love my son and family as well as my job, and I have to keep both.”
She has searched for a baby sitter for six months and has yet to find one, she says.
The number of mothers taking their babies to work in Bamenda has increased because of a deepening shortage of nannies, working mothers report. Many school-age girls who used to care for children now attend school, thanks to an effective campaign against child labor.
While some employers say they do not mind mothers bringing their babies to work, others say they cannot allow the practice because it lowers mothers’ productivity. In response, one local nonprofit organization urges employers to give mothers the full maternity leave they are legally entitled to and to create rooms in workplaces where mothers can care for their babies.

In Cameroon, most nannies are children ages 5 to 14. According to a 2012 study conducted by the U.S. Department of Labor, 36.5 percent of Cameroonian children in that age range were wage earners.