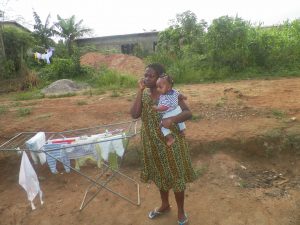 By Elias Ntungwe Ngalame
IDENAU, Cameroon, June 8, 2017( Sisterspeak237) – Julianna Senze, 40, had been in heavy labour for eight hours when she arrived at the Idenau Health Centre in Limbe, on the southwest coast of Cameroon.
Like many women in the country, she had had no prenatal care, so what should have been a routine delivery was now a high-risk medical procedure. The nurses, looking worn and tired, rushed her to the delivery room.
“We had to get her here quickly from Batoke village, some eight kilometres away, after receiving an SMS message from the doctor on duty,” said Michael Senze, her husband, his voice strained with worry. Less than an hour later, Senze safely delivered a healthy baby boy.
Only a few years ago, Senze’s story could have had a more tragic ending.
Michael recollects how his family had to bear lots of pain and a hazardous emotional downtime after the death of  their first son at the age of 3 some 17 years ago from malaria.
“ I was afraid of losing yet another baby or even my wife,” Michael said.
Cameroon has one of the highest maternal mortality rates in the world. More than 7,000 women die due to pregnancy-related causes and 58,000 children under the age of 5 lose their lives every year in Cameroon, according to the United Nations Population Fund, UNPF  in Cameroon.
Most of them live in rural parts of the country with abject poverty and where health services are weakest.
According to UNPF, access to clean drinking water, proper sanitation or medicine leading to deadly diseases, some preventable, has become part of their daily lives.
But a combination of solar energy and a new mobile phone platform, which gives women access to important health information, is changing that.
New renewable energy projects are giving more people the electricity they need to access health information, and giving hospitals power to deliver essential care, experts say.
The message that may have saved Senze’s life was sent using Gifted Mom, a mobile platform founded by Cameroon engineer Alain Nteff in 2012. 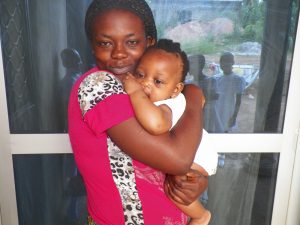 The text-messaging service and app gives women in out-of-the-way rural communities free health advice, sending reminders about prenatal check-ups and children’s vaccinations. It tells users when and where to get the treatment they need, and gives them access to doctors who can answer health-related questions.

According to Nteff, Gifted Mom is now used in all 10 regions of the country and has since helped  thousands of women, especially pregnant mothers access useful health information to  make more informed decision on themselves and their children.
“The project has significantly helped mothers and their children and will continue to help reduce the number of Cameroonian women who die during childbirth and the number of babies who die at birth or below the age of  five by at least 70 percent by 2020,” said Nteff, talking to the press in Yaounde.
But Gifted Mom’s success would be impossible if it weren’t for the other projects tackling another issue that blights the lives of those living in rural Cameroon: lack of electricity.
SOLAR AND WIND STEP IN
According to the World Bank, nearly 600 million people in sub-Saharan Africa – most of them in rural areas where poverty is high – still lack access to energy, and electrification is barely keeping pace with population growth.
Limbe, a big coastal town in southwest Cameroon, runs on hydroelectricity provided by ENEO, the country’s lone energy provider. But even residents connected to the grid can’t rely on having electricity when they need it.
Prolonged droughts have caused a severe drop in the water levels of the Sanaga river, which feeds the area’s hydropower plant, resulting in crippling power outages.
“We suffer from persistent blackouts on a daily basis,” said Motanga Andrew, the government delegate to the Limbe city council.
In Idenau and Batoke, two fishing villages about 12 kilometres from Limbe city, there are pretty beaches and vast tracts of unspoiled mangrove forests that bring in the tourists.
But, until recently, the communities couldn’t access enough power to meet the most basic needs of running their businesses and health services.
Most of the hospitals even in the Limbe city could not function for 24hours because of persistent power failures, city council officials say.
“ Sometimes we go for over three days without electricity and this handicaps the work of the hospitals putting the lives of the population  especially women and children at risk,” says Motanga.
The recent arrival of solar power, however, is already improving the lives, health experts say.
In 2015, a renewable-energy expert from Canada began using homemade wind turbines and solar panels to build a network of renewable energy electrical stations to supply power to homes and medical clinics in the area.
The networks are also used to charge motorcycle batteries, which residents take home to power their lights and charge their cell phones, which they can then use to conduct business and access health information.
Also last year, the African Resource Group Cameroon (ARG-CAM), in collaboration with the Limbe city council, built mini-electrical grids to provide light, cooking energy and phone-charging stations to the people of Limbe, Idenau, and Batoke.
According to the non-governmental group’s director general, Edmond Linonge Njoh, the initiative, funded by the African Union’s New Partnership for Africa’s Development, aims to power health institutions,reduce the fishing communities’ dependence on fuel wood and kerosene, both of which come with significant health risks.
“The coming of alternative and cheaper energy to our council area is a welcome relief,” said the government delegate to Limbe.
The local council official recalled with a sense of happiness the first day solar panels arrived in Limbe.
“It was like darkness has been crushed by light. I could not imagine the sun [would] be our saviour,” Motanga said.
“The coming of alternative and cheaper energy to our council area was born out of the need to improve the livelihoods of the people, alleviate poverty, save the lives of children and mothers and fight against climate change,” Monjimba said.
In Idenau, storekeeper Njombe Ikome said the provision of solar energy to the community has changed the lives of people there.
“Our wives can now power their phones to receive free health related information and children can  do their homework at night and perform well in school,” he said.
According to Rose Agbor, assistant warden of the Idenau Health Centre, the facility used to help fewer than 15 pregnant women and nursing mothers each day.
Now, with solar energy providing a reliable electricity supply and the Gifted Mom platform raising awareness of the availability of prenatal care, the centre sees over 50 patients daily.
“. What we gain from this life saving technologies is immeasurable,” she said.
According a 2016 UNICEF report  the mortality rate of children below five years in Cameroon has reduced from over 150 per 1000 in 1999 to less than 88 in 2015, while maternal health care has gone above 60 %.
From 1990 to 2015, the global maternal mortality ratio declined by 44 per cent – from 385 deaths to 216 deaths per 100,000 live births, according to UN inter-agency estimates. This translates into an average annual rate of reduction of 2.3 per cent. While impressive, this is less than half the 5.5 per cent annual rate needed to achieve the three-quarters reduction in maternal mortality targeted for 2015 in Millennium Development Goal 5, the report said.
CAMEROON