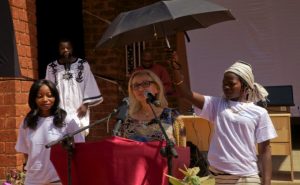 BOBO DIOULASSO, Burkina Faso (Thomson Reuters Foundation) – Africa’s first hospital to offer free clitoral repair for victims of female genital mutilation (FGM) opened its doors in Burkina Faso on Friday, but no patients were admitted because the government refused to allow foreign doctors to perform the surgery.
Clitoraid, the American organisation that built the “Pleasure Hospital” with funds from the controversial Raelian spiritual movement, said it believed the government had come under pressure from mainstream religious groups which opposed its philosophy.
The organisation had raised more than $400,000 for the facility in the second city of Bobo Dioulasso and had booked around 80 women to undergo the reconstructive surgery in early March.
However, the government said despite the positive impact this could have on the worldwide movement to put a stop to FGM, Clitoraid had failed to file the relevant paperwork to establish the hospital or to verify the qualifications of their doctors under Burkina Faso law.
“The law not only protects patients from malpractice, but also doctors in Burkina Faso who are certified to do the procedure,” said Minister of Health Lene Sebgo, adding that a number of national practitioners already carry out the surgery in the capital, Ouagadougou.
FGM is estimated to affect around 140 million girls and women, with the practice concentrated in Africa and pockets of the Middle East and Asia. Traditional cutters, who use anything from scissors to broken glass and tin can lids, perform the harmful practice.
It can cause haemorrhaging, shock, chronic pain, urinary tract infections, cysts, menstrual problems, infertility and even death. It also increases the risk of labour complications and newborn death.
The repair surgery involves breaking open the scar formed by FGM and pulling the clitoris, the majority of which lies beneath the surface, back to the surface, relieving the chronic pain associated with the practice and restoring sensitivity. Brigitte Boisselier, president of Clitoraid, told Thomson Reuters Foundation their doctors were experienced in the practice and had trained under Pierre Faldes, who pioneered the procedure in France.
“Our doctors are trained to perform the surgeries, but the government says there are irregularities in the paperwork,” Boisselier said after an inauguration ceremony was held at the hospital. Inside one empty ward was a row of neatly made beds, with a teddy bear placed on each one.
NON-VIOLENCE AND SEXUAL PLEASURE
Realists believe life on earth was created a long time ago by extraterrestrials known as Elohim, who will one day return to judge humanity. The religion is guided by two main principles – non-violence and sexual pleasure.
However, the Burkina Faso government is concerned that the cult organisation, which is banned in France, is using clitoral reconstructive surgery to recruit vulnerable women into their movement, which has already over 90,000 members across 128 countries.
“Medical organisations should be focused on saving lives and not advertising their religion in an attempt to convert vulnerable people,” health minister Sebgo said, echoing the concerns of aid workers throughout the region.
Boisselier said the request for a license was submitted in 2011 and the organisation received repeated assurances from regional and national officials that the hospital could open, but reneged at the last moment.
Clitoraid rescheduled surgeries to take place in a neighbouring clinic in Bobo Dioulasso. The organisation had already trained a local doctor, and had operated on 29 women since Monday. However, the government has also demanded a stop to this practice.
Boisselier remained positive.
“We’ve already made an impact. Private practitioners have dropped their prices from 100,000cfa to 25,000cfa ($200 to $50) and we’re hoping the local doctor we trained will carry on providing this service under our supervision,” she said.
“We will continue doing our best to help FGM victims get their dignity back as women and enjoy their right to enjoy physical pleasure and fulfillment.”
Source: Thomson Reuters Foundation  http://www.trust.org