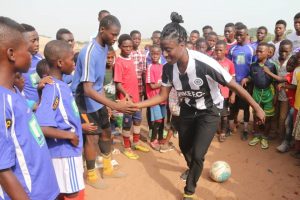 The festive season rekindles the spirit of sharing and giving across the continent. Many institutions, groups, and individuals reach out to the underprivileged for various reasons. Most often those who carry out these acts, do not expect anything back. It is the case of some female African football stars, who have, this festive season become the Santa Claus or Mother Christmas to many in their communities. Barely few weeks when we read about Cameroonian striker Nchout Njoya Ajara who launched a campaign against early marriages, the right to education of the girl child, and also assisted some students as well as visited inmates in her Foumbot and Foumban communities, other female players followed her steps.

25 year old Nigerian International and former Athletico Madrid ladies forward,Francisca Ordega, visited internally displaced persons in her hometown in Gboko, Benue state. The striker on the eve of Christmas, took along food as well cash to the dozens of families in her area. She also operates a charity foundation called Francisca Ordega Foundation.
Ghanaian striker, Bayern Munich captain and two times women’s Bundesliga winner, Eunice Beckmann, this week, launched a charity project in Accra to positively influence the life of street children by feeding and getting some of them back to schools.
These and many others that we haven’t been able to unveil, have caught the love and attention of many football pundits and critics. Most of them believe that more attention should be paid on the exposure and pay package of these female football stars who have proven that they are not just working for their pockets but also to make the world around them better. They are however happy that these football warriors are able to give back. SisterSpeak237 spoke with Victorine Fomum, former female Lions Cadet Coach about the pay gap for female footballers
She says, “These women are all awesome. They have a good heart with their little investments. Imagine for once that their various country officials treated them like the male football teams. Do you know how many lives these women would have been changing? Empower a girl, you empower a whole nation, continent and why not the world”. Victorine says the pay gap is discriminatory and female footballers deserve equal pay for equal work.
Angu Lesley,a Cameroonian football reporter thinks if football authorities could invest more in Women’s football, the lives of these footballers might improve. 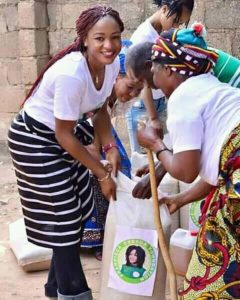 Ordega in one of her outreach missions

“ The recent humanitarian actions by most of these ladies(Nchout Njoya Ajara of Cameroon and Valarenga ,Eunice Beckmann of Ghana and Real Madrid,Francisca Ordega of Nigeria and Washington Spirits amongst others) in football is worth commending because when you look at what the ladies make and what their male counterparts make in football, the gap is very wide. In fact, a little extract of a publication by Elsie John in April 2018 on what the top five female footballers in the world earns, showed that, Brazilian legend, Marta Da Silver earns approximately $315000 in a year playing for Orlando Pride in the US, while the top male footballer, Lionel Messi earns about $111 millions a year at Barcelona. So the difference is quite clear.  It’s not totally at the level of the individual clubs ,or Federations to sort out this difference. Confederations have to come together through the mother body FIFA,to invest more in the women’s game, so as to improve the audience which is going to be a major breakthrough in the attempt to make women earn more”.