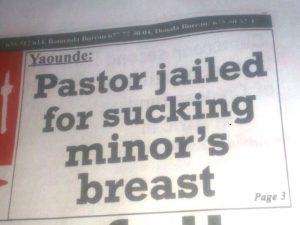 By Comfort Mussa
Yesterday I went to the news stand for my daily supply of newspapers. I was  drawn to The Guardian Post edition  1070. It had a bold headline at the top of the cover page which read   “Pastor jailed for sucking minor’s breast”
Yes!! I told myself it serves the Pastor right .I was glad to see the story prioritized on cover page. Not only are stories on violence against women under reported in mainstream media in Cameroon, when they are, the stories are buried in rather obscure pages   inside the newspapers.  Seeing one on the cover page was a relief.
My relief quickly turned to disappointment as I read the inside story. A second look at the headline in the story prompted the question, why did the paper say , “Pastor jailed for sucking minor’s breast”.  The headline downplayed the severity of what the pastor had done. Why not call it what it is – pedophilia or sexual molestation.
Also, the story concealed the name and denomination of the 50 year old Pastor but mentioned the name of the 13 year old. The only name mentioned in the whole article is the girl’s. How distasteful. It is in the public’s best interest to know the name of the said pastor and his denomination.
In Cameroon mainstream media, it is very common to read such stories  on violence against women, especially rape,  reported from a male perspective. This   perpetuates stereotypes and myths about women while ridiculing and trivializing their needs and concerns.
According to the story, the pastor justified his action by saying the girl undressed herself in his presence and as a man, he could not resist. The story narrates that the pastor agreed to have had sex with the kid once although her parents said it was thrice.
If the common man blames women for attracting rape to themselves, one would expect the courts to protect the women/girls and not play into the everyday victim blaming which often makes victims shy away from reporting the cases in the first place.
I was shocked at the detail in the story which stated that the presiding judge hearing the case mitigated the sentence because ‘he recognized that the pastor is only human and could not resist the young girl’s nakedness”.
Did the court not recognize that the naked body belonged to a 13 year old, church member  assaulted by a 50 year old pastor?

Any man who justifies rape by advancing the argument that the temptation of a girl/woman’s naked body is too hard to resist, is a rapist waiting to happen (that is, if he is not yet one).

What is irresistible about the naked body of a minor or that of an unconsenting adult?  If the church and court  use the excuse of the weakness of men , hence justifying why some of them can’t help but rape women, then you can understand  how many women in Cameroon have nowhere to run to in the face of sexual abuse. These are the stories we must seek and tell fairly.
Mainstream media should be able to tell these stories in objective ways that challenge such toxic masculinity, offers a voice for victims/survivors and holds the powerful to account.