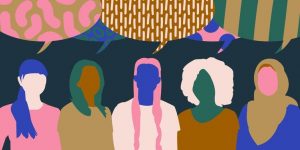 By Yandi Melody
We’ve all heard this before. Men are trash. Hot flaming pieces of garbage which should be kept far, far away on the fringes of society, never to be dealt with again. No, I am not bitter, no I am not hurt, and no, I am not saying this because I happen to be single.

I’m saying this because it happens to be true.
So why does that statement hold such divisive power?
Why does the mention of men and trash in a single sentence have the propensity to send tempers flaring, and apologists scurrying for their patriarchal armour? Most importantly, why should you even care?
The truth of the matter is this; whether or not you acknowledge it, patriarchal structures exist and affect us all negatively, women and men alike.
It should be relevant that the majority of men in our society rape, abuse kill, disenfranchise, police and widely victimize women.
Our very society is rooted in the oppression and exploitation of the woman in order for men to profit from our emotional and physical labour. By declaring that “men are trash,” one isn’t rooting for a gender war or their overall demise, but for the destruction of the systems which make it possible for the subjugation of women and her inferior place.
Gendered insults (slut, bitch, whore), misogyny, double standards, sexist attitudes are designed to assault the female psyche and are served to women on the regular as the norm. We know that a woman with multiple sexual exploits is reviled while a man in her place is celebrated and emulated. We know too, that women are usually paid less than their male counterparts.
We are constantly forced to grapple with the possibilities of sexual harassment (which we should all know very well by now (hashtag Me Too!), rape and the normalisation of rape culture, (See Epie) and domestic violence.
More often than not, due to the stigma placed on such violence, women are forced to put up and shut up, leading to toxic situations and vastly underreported crimes. How many of us have stories of unwanted approaches, overtures, touch?  Bymeans of (sexual) coercion, “stealthing,” and “revenge porn,” we are constantly degraded and our autonomy as human beings is eroded.
Yet the status quo is upheld, even reverently so by BOTH sexes. So yes, they are trash, and yes, there may be exceptions (insert eye roll). But before you pick up your shields remember this – ‘men are trash’ is certainly not limited to the scope of romantic relationships and squealing ‘not all men’ does not, and will never serve any constructive purpose.
So, for the girls who know the current status quo leaves much to be desired and want to have conversations towards shifting the imbalance and achieving gender equity, this is for you.
Our realities and futures will be the ones we decide to carve out for ourselves by making our voices heard and rejecting the current ‘normal.’ It is only by acknowledging the structures that keep us back that we may find ways to move forward.
The conversation starts here and I hope you’ll stick around for the journey!

Thank you for the great and informative article!

That was a deep article. Just as you said the status quo is being upheld by both sexes. The issue is alot of men are dealing with presure in the wrong way. Alot of men are not trained, i do not mean “not educated”. Being a man is a fine art lots of men are lacking in resulting in issues of poor governance, corruption , poverty, inequality gaps and lots of the gender issues stated above. A man needs to be trained in his mind first, his spirit and his body. Conventional education can’t provide such. The basis of such training are from respective family backgrounds and the individual concerned. Men need to realize women are their helpers with different characteristics , powers and abilities. Men need to find purpose, organize their lives and provide while allowing the lady to express her potent ability to multi task, manage, enhance, grow and reproduce visions on massive scales. Women are the better equals of what we could never be. #theearthisawoman. #media91, #mediapower

You can’t blame men for the way society sees women. Woman has the power to bring down the most powerful men on earth, (even bible confirms this) so what are you crying about? They say unity is strenght, have you guys ever tried that and it did not work?
International day of the woman in Cameroon is a day for feasting and having fun, no achievement s celebrated, no plans to path the way for your daughters. Let the change begin with you. Start by stop insulting men because they maltreat you.

Great write up. But i refuse to blame all female problems on the patriachy. Some times we women stand in the wayof our own progress.